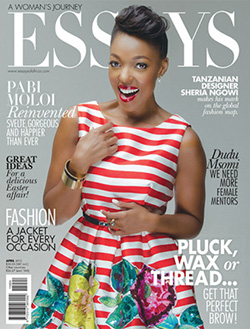 Founder and CEO of Busara Leadership Partners, Dudu Msomi is a guidingvoice on transformation, strategy and governance in South Africa. Holding several directorships on the Financial Services Board, National Housing Finance Corporation and Agricultural Research Council, she spoke to Caryn Thandi Petersen about her work of empowering women and shaping the leaders of tomorrow.

Passion. For centuries, this has been the raison d’etre for artists and poets – so too for activists, world leaders and maverick thinkers. Yet so rarely does it find its way into the boardroom, even though it is within these rooms that some of the biggest and most powerful decisions are often made; decisions that can have far-reaching consequences for countless lives.

Enter Dudu Msomi, a woman fired by passion to effect change in the corporate world. “I have always known that I would use my passion for thinking, strategising and making situations better,” says Dudu. “I just didn’t know what form this would take.” Until she entered the corporate environment, that is: “I fell in love with business, organisations and leadership.”

This love for business led Dudu to make the leap into starting her own company, Busara Leadership Partners. “One of the biggest challenges for South Africa and globally is that the demand for certain skills, qualifications and experience exceeds supply. There is a dearth of leadership, strategy, communication and governance skills,” explains Dudu. Busara Leadership Partners was started to address this scarcity of skills, developing effectiveness amongst board members, management and entrepreneurs using an integrated approach. The various insights that her (all-female) team brings to client challenges ensure fresh and relevant results.

“It has become a South African stereotype that white people are the teachers, are experienced and competent, while black people are politically connected and need to be ‘empowered’ and trained,” states Dudu. She is motivated by the desire to eliminate this debilitating stereotype and challenge the perception that black people can only be valued for their connections or providing “symbolic lustre” to a company, rather than contributing at a strategic or operational level. Her team is inspired to influence and shape the quality of leadership in our country. “Busara Leadership Partners believes that effective leaders and managers have credibility because of their technical competence and personal integrity.”

A Woman’s Place is in the Boardroom

As the head of Busara Integrated Governance, Dudu provides strategy development and facilitation, leadership coaching and board advisory services as well as workshops on diversity and governance. Her masterclasses for the boardroom are particularly powerful, as she guides women do be prepared and to deserve their seat at the boardroom table. “Though women are increasingly respected as professionals, very few are holding leadership roles in corporate South Africa. Companies benefit from their fresh perspectives and by understanding their customers better, who in the majority of instances are women, as they consist of 52% of the population,” explains Dudu.

Her passion for challenging the status quo is evident, as she simply lets the facts speak for themselves: “Research has been indisputable in the fact that companies with gender diversity on boards, outperform boards lacking women representation.”

According to Dudu, “There is a view that representation of women in leadership would multiply exponentially if women were readily able and willing to collaborate and actively support each other using networking as one of the main tools.” This much-echoed belief drove Dudu and her team to interrogate notions that “men are better at networking than women” and that “women in the corporate world don’t offer support to each other”.

The research conducted by Busara Leadership Partners aims to propose solutions for increasing the number of women in leadership positions, as well as provide tools for women to change their circumstances. Unsurprisingly, they found that men have the ability to compartmentalize and spend time building relationships – indulging in networking activities such as golf, game farm weekends away, long lunch meetings – without guilt, as they have supportive structures in place; whereas women often see this as a selfish activity, not a ‘nice girl’ thing to do. Trying to balance quality time for both career and domestic responsibilities remains a daunting challenge, and a burden that many women carry.

Their research also shed light on how women are often friendly at the expense of supporting each other to grow. “Being too busy to actively help each other as women, perpetuates our own alienation and makes us even more vulnerable when we occupy leadership positions,” Dudu observes. She believes that change cannot be left to chance or self-promotion, particularly as women who self-promote often receive a double-standard backlash. “As women leaders we must not under-estimate our own power in taking on more active roles to ensure that upcoming women are exposed to experiences and decision makers that will ensure their upward mobility,” says Dudu.

She refers to a quote from former US Secretary of State, Madeleine Albright:

“There is a special place in hell for women who don’t help other women”.

Much of Dudu’s time is spent conscientising women on the power of networking, stating that, “Networks are critical for individuals’ successes due to the advantages one gains through access to privy information, opportunities for collaboration, protection, visibility and upward mobility.”

Mentorship for the Future

Dudu sets an example amongst her peers in living her words, touching many lives by mentoring others. She is adamant that to be a mentor is to be instrumental in increasing women representation on boards – not just in South Africa, but as far as one can reach. By doing so, she strives to: “Increase interactions, partnerships and trade amongst women globally and to build a pipeline of female leaders who bring a balance of technical competence and ethical decision-making.”

Dudu Msomi’s ultimate vision is of a world that ceases to treat women as second-class citizens; where women are valued for their skills, knowledge and experience. Her work contributes to this vision in a most powerful and profound way, propelling women to rise up and take their rightful place in business, politics and civil society. 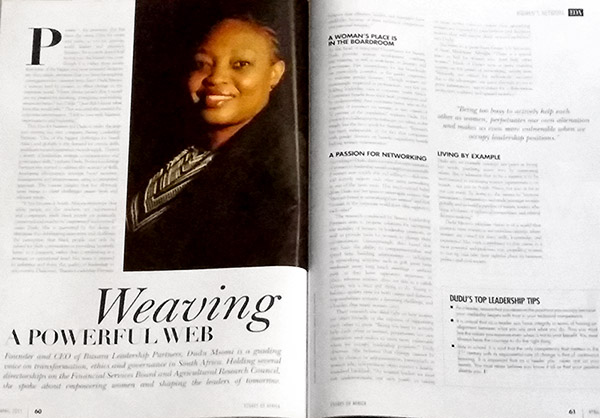 Cheating is about how you feel about yourself

Reflecting on what being inspirational means.

Busara Leadership Partners - changing the image and experience of consulting

Busara Leadership Partners - changing the image and experience of consulting I reached back into the archives for an article I wrote in October 2016. What has really changed since then, despite the Covid-19 epidemic? Well maybe that we use Zoom rather than Skype these days 😃😀😃 #Throwback2016: My American Mentor chuckled last night when she was reading out the agenda I had sent...Read More

Steve Bantu Biko - Black (Wo) Man You Are On Your Own

Steve Bantu Biko - Black (Wo) Man You Are On Your Own Black Consciousness is an attitude of the mind and a way of life. Its essence is the realisation by the black (wo)man of the need to rally together and to operate as a group to rid themselves of the shackles that bind them to perpetual servitude. - Steve BikoThat is where we missed the plot. Political power...Read More

"When the music changes, so does the dance."African Proverb

Earn B-BBEE points by supporting Busara Leadership Partners, 100% Black African female woman and managed enterprise. Under the Amended Codes, the target for Enterprise Development is  1% and Supplier Development are 2% of Net Profit After Tax (NPAT) respectively.

"When the music changes, so does the dance." African Proverb